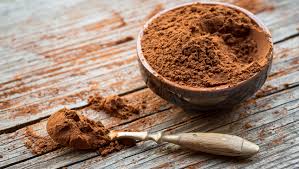 Description
Raw Organic Cacao Powder comes directly from the beans produced by a tree native to the tropical area of the Amazon. It has important historical significance. The Mayans believed it was a divine gift and held annual festivities for their Cacao God. The Aztecs used it both as a drink during rituals and as money. After Columbus discovered Cacao in America in the 1600s, its popularity spread rapidly throughout Europe.

Nutritional Benefits
Raw Organic Cacao Powder is highly nutritious and contains fibre, iron, calcium and magnesium. It is a good source of phenethyamine, an essential amino acid that is a natural antidepressant and elevates mood. Cacao has been shown to boost endorphins, the body’s natural opiates – which are responsible for the highs often felt after exercising, laughing or having sex. Cocoa may also increase serotonin levels – the body’s feel-good hormone. Additional benefits of raw organic cocoa may be that it appears to lower cholesterol, increase blood flow to arteries and boost cognitive performance.

Store in a cool dry place.