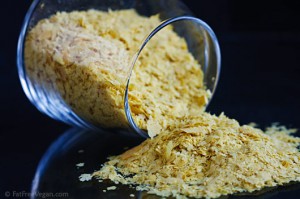 Nutritional yeast (also known as nooch) is a rich source of important vitamins and minerals, protein, and fibre.

Plus most nutritional yeasts don’t contain any animal-derived ingredients. This makes nooch a useful alternative to dairy cheese in certain dishes.

Nutritional yeast is the same species of yeast (Saccharomyces cerevisiae) used to make beer, bread, or kombucha. But it’s a different end product.

One major difference is that, for the most part, people use baker’s and brewer’s yeast in their active form. Nutritional yeast is inactive, so it has no leavening ability. In other words, it won’t make dough rise — and it won’t reproduce inside you, even if you eat it raw.

Nutritional yeast is made by growing S. cerevisiae on a sugar-rich molasses medium. Then, it is deactivated with heat, washed, pasteurized, dried, and crumbled.

It’s almost always fortified with nutrients, particularly B vitamins, before ending up on store shelves. Unfortified versions are also available.

In the lingo of yeast professionals, nutritional yeast is a primary-grown yeast. That means it’s cultivated specifically for its nutritional value and not as a by-product or a means to another recipe.

Some of these include zinc, selenium, magnesium, molybdenum, phosphorus, and potassium. These are all essential for good health. They also support a strong immune system and active metabolism.

Yeast is also a rich source of chromium, which your body needs to regulate blood sugar. For this reason, it can be beneficial for people with prediabetes, diabetes, or anyone concerned about balancing their blood sugar levels.

Another study focused on marathon runners who consumed a spoonful of nutritional yeast daily.As a result, it reduced post-race incidence of upper respiratory infections. It also increased the runners’ overall physical AND mental health.

Plant-based eaters use nutritional yeast as a condiment and as an ingredient to add a savory, cheesy, nutty taste to a myriad of dishes.

It’s often used to make bland dishes flavorful and delicious and to add a burst of umami to almost anything. And it adds an appealing, yellow-orange color to recipes.