Home>Blog >Spice Up Your Life! The Health Benefits of Spices 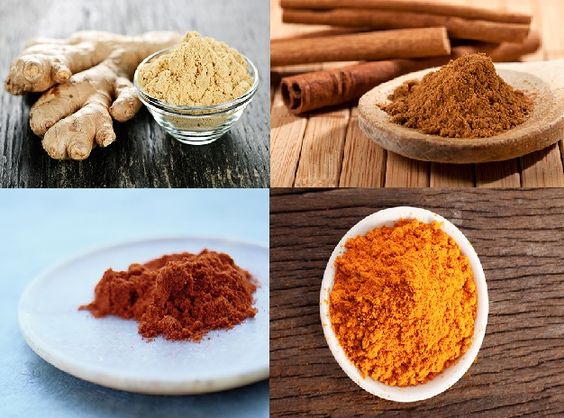 Spice Up Your Life! The Health Benefits of Spices

Spice Up your Life!

Turmeric, Ginger and Cinnamon – we’ve been consuming these wonderful spices for centuries as flavouring agents, colourings, and preservatives. But did you know that they also contain natural plant compounds which can play an important role in cancer prevention and treatment? Here are some good reasons to make them part of your everyday life, and get the health benefits of these spices.

Turmeric is considered the number one spice when it comes to stimulating our immune system.  Growing modern research backs this claim, along with at least 5,000 years of traditional medicinal use in Eastern cultures – where doctors are far more accustomed to using herbs and spices for their healing properties. Afterall, it plays an integral part in India’s Ayurvedic healing and traditional Chinese medicine. Why is turmeric considered cancer-protective?

Whiz in the blender and enjoy!

Ginger has a long history of medicinal use dating back 2,500 years. Traditionally used as a digestive aid to relieve nausea, diarrhea and bloating, ginger’s anti-inflammatory properties are also useful in the treatment of cancer, osteoarthritis and rheumatoid arthritis. Numerous studies are confirming that ginger has anti-metastatic properties that inhibit many types of cancer. Here are some more reasons to make ginger a regular part of your day:

Tip: Add fresh ginger next time you make a green smoothie – it totally improves the taste! Or add this classic Carrot Apple Ginger Juice to your routine:

Simply process apple, carrots, lemon and ginger in juicer. Stir in a pinch of salt. Serve and enjoy!

A common ingredient in fragrant baked treats and sometimes added to spice up coffee, but must people are unaware that cinnamon may have cancer protective properties. In fact, lab experiments demonstrate that cinnamon extract slows the growth of cancer cells and induces cancerous cell death. If these properties extend to humans, then cinnamon may be able to slow the growth and kill cancerous cells. Cinnamon also protects against type 2 diabetes and heart disease by optimising the flow for blood in vessels. If taken regularly, regular use can help lower blood sugar, triglycerides and cholesterol levels. There’s more:

Tip: This Clever Cinnamon Smoothie is a deliciously different way to enjoy the beneficial effects of cinnamon:

Simply blend all ingredients in a high-speed blender and until smooth and creamy. Serve with an additional sprinkle of cinnamon on top.

So there you have it! Three spices that taken daily, or at least regularly in your diet, will help prevent or fight cancer and many other diseases too. Couldn’t be simpler!

Sorry, the comment form is closed at this time.