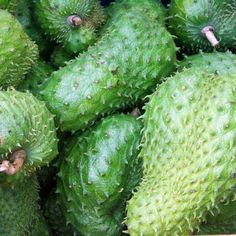 Description
Graviola may only have recently become popular in the West but it has a long history in ancient herbal remedies and treatments. Also known by other names such as soursop and guanabana, this small tree grows in tropical America. The soursop fruit is very tasty (sort of like custardy apple) and has been used to add flavor to jams, ice cream, juices and nectars.

Nutrition Benefits
The soursop fruit is rich in vitamins and minerals including vitamin B1, B2, and C. It also has potassium, calcium, zinc, phosphorous and magnesium. The stem, bark and leaves are rich in antioxidants particularly Coenzyme Q10 to fight inflammation, eliminate free radicals, and ensure your body is functioning at optimum levels.

Graviola displays cancer-preventive properties, according to researchers from the University of Nebraska who published a study in the journal “Cancer Letters” in 2012. They evaluated graviola extract and found that it contains compounds that play a role in regulating the metabolism, survival and growth of cancer cells, shrinking tumors and reducing cancerous cells’ ability to grow and spread. Another study, published in “Nutrition and Cancer” in 2011, determined that taking 200 daily milligrams of graviola extract for 5 weeks inhibited the growth of breast cancer tumors. These findings may indicate that graviola offers protection against some forms of cancer.