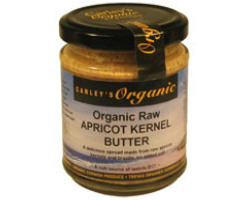 Description
Raw, organic apricot kernel butter is made with raw “sweet” apricot kernels. It is made by simply grinding raw kernels using traditional stone milling machine. It is a slow and careful process ensuring that all the benefits and nutritional value is preserved.

Nutrition Benefits
Apricot kernels–the seeds found at the centre of the fruit–feature high levels of B17. Although technically not a vitamin, B17 has consistently been referred to as such. The Vitamins and Health Supplements Guide describes B17–also known as amygdalin–as possessing properties helpful for reducing pain associated with arthritis and lowering blood pressure. However, amygdalin’s most commonly referenced attributes revolve around its purported cancer fighting and prevention capabilities.
In Chinese pharmacology, the pits are classified as a drug rather than as a food as they contain cyanide (hydrocyanic acid).  They’re used medicinally to combat cancer. They also stimulate respiration, improve digestion, help reduce blood pressure and arthritic pain and give a sense of well-being.
According to the Food and Drug Administration there is no scientifically accepted evidence of amygdaline’s efficacy. However, it’s commercially available as vitamin B17. It continues to be used in cancer clinics outside of the United States.

Culinary
This spread can be put on toast and eaten in the same way you would use peanut butter. Once opened it should be consumed within 3 months. Store in a cool cupboard or in the fridge.